This is me heading back to the airport after the rain had passed. 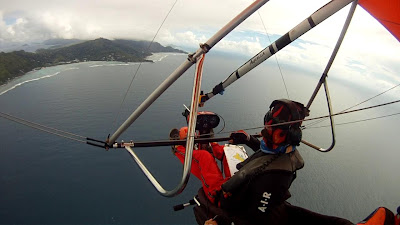 
I was racing to south point. Below the turquoise ocean sparkled in the last of the sunlight and for the time being the coral reefs were edged against a backdrop of shaded blue. The lush tropical forest and granitic hues made a picturesque scene to the right and for a moment I was captivated by all this beauty. Mother Nature sure knows how to turns things on! The dark rain clouds to the left put more urgency to my flight as I increased speed to 50mph at 1500ft. There was a clear spot other side of South Point, from there I knew I could skirt around this tropical shower.

Of course the best laid plans can go awry and by the time I got to South Point I was forced to just 1000ft to remain clear of cloud while I was being buffeted by some uncomfortable turbulence. It was rather surprising even after thousands of hours of flight experience in these tropical conditions. Of course, the flight up the west coast for the remainder of the survey flight was out of the question. Thick torrents of rain and low cloud in that part put paid to that. And by now, to the north east the rain was falling at the airport too making returning not an option. Nothing to do but wait- I knew the rain, like all things will eventually pass.

For the time being I skirted around the low tide exposed Capuchin rock. It was a favourite whale shark spot but even here there was surprisingly little action. Just the heaving swell swirling around the large granitic boulder while white foamed waves crashed over it only to disappear in the deep water on the other side. Here the water fell to over 40 meters and with the thought of the recent shark attacks the dark depths looked ominous. While my thoughts roamed into these inky depths imagining the size of 5 meter tiger shark cruising the depths, the turbulence shaking my tiny aircraft’s wings went by almost unnoticed.

After 50 minutes the airport cleared and I returned for lunch. All in all just another day’s flying. Par for the course, as one would say, nothing unusual for flying around the Seychelles island of Mahé in a little micro-light. And who knows, perhaps the afternoon might bring some sharks...

Email ThisBlogThis!Share to TwitterShare to FacebookShare to Pinterest
Labels: Business as usual