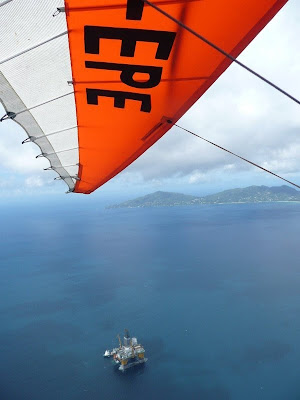 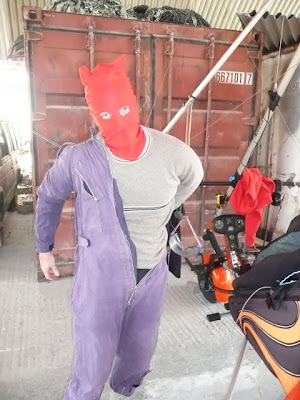 Here is Neil in his hightech sunscreen mask (and suite). Ninja turtle go!!!! 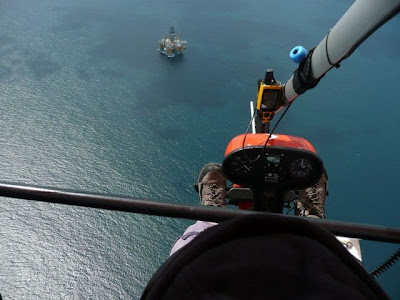 To cut a long story short...

We are flying. It has been epic flying too. Loads of whale sharks and loads of turbulence. :))) There is a big oil rig anchored on the west north west side of the island. Today Neil and I managed to get a closer look...

Email ThisBlogThis!Share to TwitterShare to FacebookShare to Pinterest
Labels: Oil in Seychelles...

It was a stunning sunset – pinks and blues that Picasso could not have imagined. And then bats; oversized bats descending onto fruit trees from everywhere. It is quite reflective of life – the beautiful and the not so beautiful and quite accurately reflected my mood. I don’t think I have been so stressed in my life. For three days in a row I had a headache – woke up with a headache – went to bed with a headache. And then yesterday morning David and I clashed – big time. I know him quite well and the worst thing one could do is to argue with him or go against his wishes or ideas. But I did. I took a stand. Of course it was never going to go anywhere good. I knew that too. In the end all my standing ground and having my say lost its meaning with the words, “Well you have a warped sense of reality then…” There was no need for me to comment since nothing would change. So I kept quiet. But I was so fuming mad. David was fuming mad too. Stress is a different sort of a character…
Is one not supposed to feel better after such a blow off?
Anyway…
We have run into a problem with the renewal of our Authority to Fly. To help those that are not familiar with the workings of the civil aviation authorities let me try to explain it, briefly.
Every aircraft needs an annual inspection for airworthiness. This inspection must be done by a so called Approved Person or AP. The AP signs the forms which are sent to CAA (Civil Aviation Authority) and after the aircraft owner has paid both the AP and the CAA, the CAA issues a certificate of airworthiness for the aircraft. In the case of the micro-light it is an Authority to Fly certificate. Our problem this year is that we have no AP person to do the inspection. Our plan was to use our good friend Peter who is a qualified AME (Aircraft Maintenance Engineer) but as it turned out, Peter does not have the appropriate rating (cloth and tubing rating). Unfortunately we only discovered that on Tuesday – the day after my arrival.

Of course, the back-up plan has always been to fly an AP out from South Africa but this was as a last resort only. It also meant that it was going to take a few days to get all that organized. In the meantime we are missing out on flying and surveying days which of course is making everybody edgy – especially David and me. (We are both ticked-off by the whole predicament…)

Our alternative was to ask special permission from the South African CAA to do the inspection – given my experience and that Peter has agreed to help (even though he is not cloth and tube rated). It was worth a shot but this in turn opened up more cans of worms. We needed to write motivational letters – agreements from Peter, formal flight permission letters from the Seychelles CAA giving us permission to fly in their air space (which though has always been openly accepted by the Seychelles CAA it has never been put in writing), proof of experience etc and all of these needed to be emailed to RAASA (Recreation Aviation Association of South Africa) who has been delegated by the SACAA to look after the airworthiness of micro-lights. RAASA in turn needs to have a board meeting and decide if we could do it or not. All of this of course takes time and it has been a difficult to decide which of the two options is the better - one is more expensive but a certainty (flying an AP out to Seychelles) the other is cheaper but not a certainty at all. To be honest, we didn’t even know when RAASA will make a decision nor if they even would say yes in the first place. It is small wonder we are stressed.

And if you did not follow one bit of that – don’t let it bother you. It’s just business and politics. Like me, I am sure you are interested only in the flying and whale sharks. J

In the meantime we have been doing loads of maintenance on the micro-light. It was quite necessary too. Surprisingly the wing is in great shape. We did a major inspection of her today and frankly did not even need to change one bolt. The undercarriage required some attention. Would you believe I discovered a smooth patch on the front tyre! (Pointed out by Peter!)

We are here but still with red eyes...

And red eye it was – or still is... It is Monday night and we are all hanging out in the lounge after a long day. Laura, Gareth, Neil and I. Each with a book, laptop, iPhone. Own thoughts. Own ideas of the day and tomorrow. We are all knackered. Neil and I more so since we have had hardly any sleep from last nights flight. We have pushed through though and will have sweep sleep tonight. In spite of the dogs – that are already barking – and the three blonds from upstairs, who’s music and chats are youthfully piercing the tropical night. Thank God we are tired…

Today Neil and I have done some good PR work. After the introduction to the new interns, including happy hugs from last years in-turns now turned group leaders, neil and I managed to get our flying show on the road. Visits to Airtel – reactivating the mobile, then Frankie from Air port security for the nec permits and permission to enter the appropriate gates and access to the airport grounds, Chatting to Donn about hangar permission and then, the real problem for the season. Visiting IDC and Peter. We need to ask Peter to do the AP inspection on our plane. He was not there so will give him a call. Person to person is so much better.
Afterwards we had a great chat and coffee with Glynis and David at their house. Got odds and ends of the plane – radios, intercoms, new prop blades etc. (Tom we will sort through all this.) We finished the day with a pizza at Baobab but would you believe they had no chilies!? This was almost sacrilege. But we endured and in the end it was the local brew, Seybrew that helped to finish the evening.

Old friends that shared the evening included Abi and Caiera. So it was a bit of a reunion…
Its lekker to be back!
Wish you were here! (Really!:)
Posted by Unknown at 4:50 AM No comments:

I am sitting at Jhb International waiting for the red eye flight to board. It is 10:30. This midnight flight is a killer. (Arriving in Sez with red eyes in the morning is a certainty!) Of course I have just had to send off a few emails to try and get a few last minute glitches rearranged. We are missing a small spares box - this will have to be placed on the next flight to Sez (which is only on Friday!). This is a bit of a nuisance but not insurmountable. In light of the start of a new season these things seems to be par for the course.

I met Neil a while ago. He is our new pilot that will be helping out this season. Understandably excited but surprisingly he arrived with just one small bag. (Oh yes, I expected the small spares box to be with him so even more of a surprise to me) But it seems he has decided to travel minimalistic - something I have never been able to do. Even if I vow to do so every time, next time. Neil's girlfriend, (Monique) was seemingly not impressed with him galavanting off so early on in their relationship. Apparently they only started dating 2 and a half months ago! Of course I know too that she will be on a flight to Sez in the not too distant future too! They both seem like a nice couple.

I look forward to seeing old friends and meeting the new gang. It all happens tommorrow!

Email ThisBlogThis!Share to TwitterShare to FacebookShare to Pinterest
Labels: On the way (Jhb International)

Snow on the NZ mountains...!

I have 5 min to post this! Need to rush! ;) I am in NZ and trying to tie up loose ends for the up coming whale shark season in Seychelles. Tricky when internet connectivety is intermittend! I can tell you guys one thing though - I sure am lookiing forward to the warmth of the tropics after this visit past down under!

We have had the ussual roler coaster ride with gettign things organised for the whale shark season. one has to wonder what it is about the human race that can make life so difficult for themselves. It leaves me speachless to be honest. Simple things just needs to be made a big deal - people cant just do what they said they were going to do. Do you experience the same? I have no doubt you do. Of course I see the devil at work in all these things! ;)

Anyway, we are just about there with the organising of everything. A few minor (perhaps major but it depends how you look at it) still needs to be ironed out but I am sure it will come through.

Now I know I have just written like a politician. Wrote a lot of words but said nothing! No details... (Devils is int he details...) I will let you know a bit later. just not yet. Dont want ot annoy people at this stage of the game! ;)