You could say that Dirk and I were slightly shell-shocked, suffering the expected withdrawal symptoms – missing the warm sunny weather, the smiles of our new friends and of course the predictable routine of flying. The cold South African coastal weather was a sobering reminder too of what we have lost. T-shirt and shorts made way for jeans and track- suit tops and I ended up piling the blankets onto my bed, even sleeping with a T-shirt on. It has been a major change but suffice to say that after ten years I know the drill.

Of course the major concern is getting the hang gliding school back on track, letting people know we are up and running again kind of thing. Some students though, knew exactly when I would be back so not surprisingly the first weekend was filled with flying action.

Van Zyl, a pilot from up country and our local pilots Richard van Niekerk and Guim Pienaar did some refresher training. Only having the weekend to play with we had our fingers crossed for good weather and as luck had it, the predicted cold front was only due to arrive late on the Sunday afternoon. We resolved to drive up and down the hill as many times as we could, the pilots doing as many top to bottom flights as they could.

So Sunday arrives and Richard being more experienced with about 50 flights in total, was not that keen to rig for just a top to bottom flight. Instead he stood around launch, dragging his feet and generally talking shop with whomever was around.

“I want more action!” he said to one and all, the light Southerly winds too light to keep the hang gliders in the air. Of course, to the south west we could see the line of clouds that marked the approaching cold front but it was slow moving so Van Zyl bombed off for a top to bottom ride. By the time we were ready for the second flight, the front was much closer and I quickly send him off for another 10 minute flight down to the beach. At this time Richard decides he is going to fly after all and starts to rig. By this time the front was real close and I urged Richard to hurry up. I was keen to see how Richard was going to handle it – the idea being that he will eventually choose not to launch and stand down, thereby learning a valuable lesson in airmanship.

By the time Richard was on launch and ready to go, conditions were very light but good -certainly enough to fly down to the beach in time before the front arrives. I judged it was not possible to stay up in the light conditions so figured it ok for him to go. Well, needless to say, Richard did not get to the beach. Instead, he flew magnificently. Like a pro pilot he darted to the Wilderness village and managed to remain aloft in tiny bubbles of lift, just enough until the front moved in. On the hill, there was a bit of pandemonium. “He’s in trouble!” some paraglider pilots shouted, pointing at Richard and his blue glider. Of course at this stage everything and anything in the air was going up – including Richard, at a healthy rate of knots. Well, he did say he wanted some action…

For those on the ground things looked worryingly. Richard on the other hand was having a ball, which was not an uncommon situation – things on the ground could be really nasty while high up in the air it was wonderful and of course this was Richard we were talking about. It looked spectacular seeing this blue glider circling up under those dark clouds and I could only hope that he would have the sense to stay out of them once he got nearer.

When Richard made his way to the beach for landing and found he could not come down, only the did the first thoughts of alarm cross his mind. (It's one thing to go up when you wanted to but quite another when you did not want to!) Naturally, being Richard he was cool as a cucumber and still enjoyed every moment. Then the beach umbrellas took off at 40mph down the beach and in some far corner of Richard's mind a bit of urgency registered and then only at the thought of the how difficult it might be to try and land in those winds down there. Still thinking heroic thoughts, he decides to run with the front. “Who knows!?” He said after wards, “ I could have rode this front up the coast for a new record flight!”

Of course, heroic thoughts or not, Richard’s inexperience probably saved the day as he dropped out of the lift and landed next to island lake, safe and sound but in a bit of a gale and rain to say the least. But this is Richard we are talking about. Gale hanging is one of his specialities! (A few privileged pilots will know exactly what I am talking about! ;)

It is quite an exciting start to our flying season.

Richard just launched as I look on. And of course the frontal system moving in from the right. Thanks to Dirk for the pic! 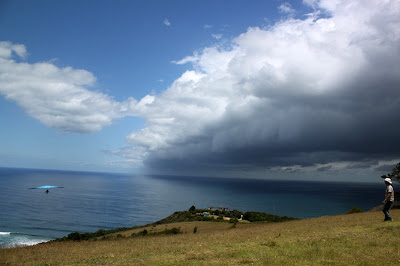 Dehydrated, bleary eyed, fuzzy head – how can people say that airports are great places to blog? I am in transit having just arrived from the Seychelles whale shark season. Not only do I feel woolly from the traveling but I do so in my mood too. How can one not feel a tad blue when leaving a place like Seychelles? Why, just yesterday Dirk and I where cavorting with two lovely ladies on an isolated rock surrounded by the picturesque turquois and granitic panorama so typical of Seychelles. (OK, cavorting is not the right word really ;) but the fact is Julia, Leah, Dirk and I played on this giant rock and the world’s biggest pool like teenagers in the sun. We jumped of the high spot, flopped in acrobatic high dives, (OK, I did!) did multiple swim through’s under over-hanging submerged rocks and laughed just like kids.

What fun we had… 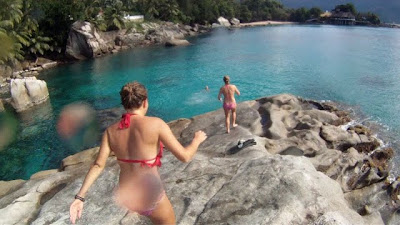 Leah and Julia - Dirk is in the water.

You will excuse me for feeling, bleary eyed, fuzzy headed and blue for a bit…

But just for a bit.

Wish I was there!

Posted by Unknown at 7:21 AM No comments:

Email ThisBlogThis!Share to TwitterShare to FacebookShare to Pinterest
Labels: Traveling... 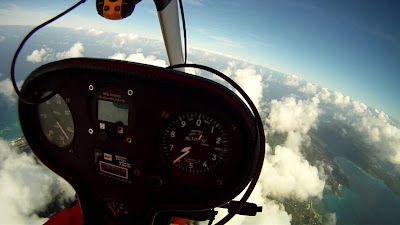 Does the earth seem round to you too..?

Normally at this stage we are so tired that we cannot wait to lay the wing at rest. However, this time around for some reason this is not the case. Both Dirk and I, in a moment of poorly disguised nostalgia, mentioned how aware we were about the privileged lives we were living. Of course considering we were flying a little orange plane over the waters of a tropical island, seeing and recording amazing things; counting sharks, manta rays, dolphins and the like, what was there not to appreciate or like? It was all super cool but even so, I could not help but have some extra spring in my step for what it was that I was doing. It was not just in the job. There was something else too. All I know is that I wanted the season to go on for ever.

After ten years this was a first.

And you are forgiven for thinking we are just less tired than other years – seeing as we have not flown as much due to the bad weather. The fact is that for the month of October we have flown everyday but for five, which is very much how it has been in previous seasons. Of course the real truth is we have flown fewer hours but that does not mean it was less exhausting – in fact quite the opposite. In a previous post I explained quite nicely the stress involved in the decision making process of whether to fly or not and given that we have had more of those kinds of times this season one could quite easily argue that we should be even more exhausted than other times. Take one flight which lasted just 15 minutes for example.

We had just taken off and found ourselves heading due south. To our surprise a very large squall line blocked the horizon from east to west with towering clouds and rain. Even worse, some of the clouds were already pushing fingers past the squall line and rain seemed to be forming in a horse shoe shape all around us. It was an easy call to the tower for re-joining procedures. Of course at that point there were 2 Boeings, 2 twin Otters, a Cessna beach craft and a US U.A.V spy plane all lined up for take-off and us being the smallest had to wait our turn. We were forced to orbit and hold while we danced around in little pockets of clearings to avoid getting wet. Those 15 minutes sure felt like 3 hours. 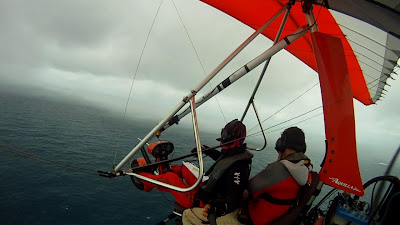 Dancing in pockets of no rain...

So the fact that we actually were probably more tired than previous years yet regretful to stop made for interesting reflection. The only change this season seemed to be a change of heart and attitude and mulling over this only pointed to the same thing – walking with God. Yes, you’d better believe that. The high’s from our best flights and shark experiences cannot even begin to compare with this walk which I have to add has been the greatest adventure in my life. It has added that cherished proverbial cherry on-top!

Thanks for keeping us safe Big Man! 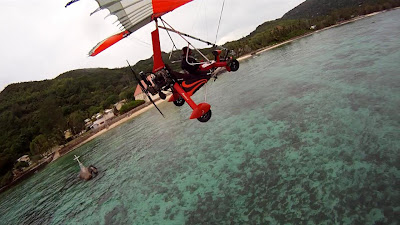 Posted by Unknown at 7:28 AM No comments: