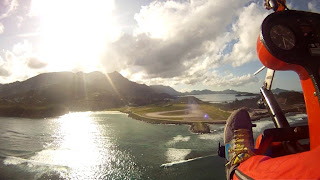 The other end of the runway...

Time they say is a healer. It is money too. And a dimension. They say that time is one directional and irreversible. That it is a commodity and precious. It is invisible, invincible and inevitable. And yet, Albert Einstein said that time is nothing but a persistent illusion. Of course, I am sure you can forgive my indulgence in some philosophical banter given that time is running out for us – there can be no illusion that the MCSS official whale sharks season 2012 is coming to an end.

It has not been the best of seasons. In fact from an economic point of view it has been disastrous to say the least. Throw in the devastating fire and we are all left with our own thoughts and interpretations of past events. The only winning side appears to be science, which given the data seemed to indicate that whale shark numbers are declining and that climates are changing. No surprise.

Yesterday, for the first time this week, Neil got into the air. Remarkably he managed to do a complete survey of the whole of Mahe, even if there were threatening rain storms in the vicinity – his descriptions are quite vivid! But the highlight was being routed over the town harbour by Air Traffic Control. While orbiting and waiting his turn to land he spotted a large black square that seemed to be moving – of course we are very familiar with the shape of Manta Rays. Neil was intrigued that this guy was right inside one of the ports, among all the boating and shipping action. The harbour is not just a safe place for boats but for fish too. Many small fry hide in large schools amongst the harbour walls, boats and other kinds of flotsam often found in these areas. Naturally (no pun intended!), predators are not stupid either and it has also been well recorded that sharks hang around these areas more often than not. It was not completely surprising to see the Manta in the harbour but it was a first.

Talking about firsts, I have come to the conclusion that the only thing certain this season has been change. To illustrate my point I would like to invite you to join me in a little project that is bound to prove fun. Click on the link, “weather where I’m at” and follow the weather forecasts as predicted for our little island over the next few days. (I have handily put in the correct link for you :) I encourage you to do so every few hours too. Without a doubt it will change while at the same time and very appropriately I might add, illustrate the volatile characteristics of the whale shark season thus far. (To be honest it was a particular dismal forecast which prompted me to write this blog entry in the first place. Now it seems to have lost some of that point I’m trying to make! :)

The other day, by no co-coincidence I might add, I was listening to music from Diane Krall. With the music in the background I was lost in thought when quite suddenly, these words just leapt at me.

“Time is made of honey slow and sweet...”

Given that my thoughts and emotions were pondering the notion of end times, perhaps it is not so unrealistic that these particular words grabbed my attention, though the fact that I was certainly not listening intently says a lot about the ability of the subconscious. Suddenly I was enthralled by the depth of imagination of not only likening time to the viscous flow of honey, but that you could actually taste it. My mind started to consider that honey could actually be slow and just as I recognized the magnificence of such a super personification, the very next line quite literally made me burst out in a chuckle.

“Only a fool knows what that means.”! (The song is ‘Temptation’ sung by Diane Krall)

I chuckled for a long time after while the ideas of slow honey, sweet times and fools danced in my head. It struck me the foolishness lies in the thought that time could be only slow and sweet – that given our season events only a fool would deny that sometimes time is swift and bitter too. 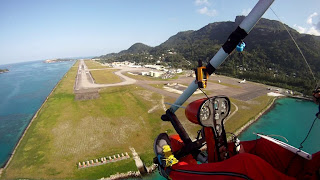 The other end of the runway...