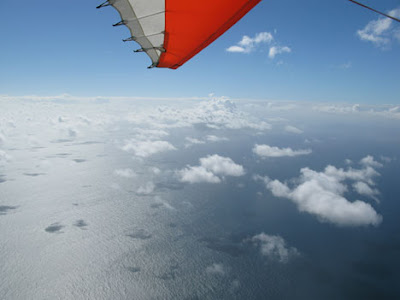 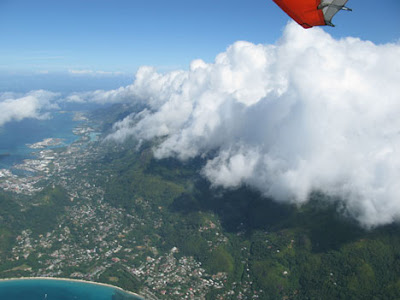 Picture comments... Just after we encountered the strong turbulence. The view is to the east with Beau Vallon below, the capital Victoria with its harbour area and in the far distance, Seychelles international airport. (We are looking almost straight down runway 13) The other pic is to the west, showing the sea and the thick cloud bulge under the wing is Silhouette island - all obscured by cloud.
The blog entry....
We awake with rain. It’s the 2nd of September. Spring has arrived (well at least for folks back home - other than a change in wind direction, here it seems to be the same all year round). After yesterdays promise, today is a great disappointment. We have a boat load of people eagerly waiting to go out to dive on some whale sharks but of course, with the rain I am grounded. With no aerial support the chances of locating a whale shark becomes extremely slim. (The weather office did not predict rain so one and all were ready to go swim with the large spotted fishes!)
Yesterday, Gareth and I managed to do our first survey flight of the whole island. It was a kind of turning point. It was made all the more prominent by the fact that we found two whale sharks on the south west coast of Mahe - a sure sign that the project had finally kicked of. Gareth is one of the new interns and is busy with a thesis on whale shark size and fin relationships (A very interesting project to say the least!) He has also spend a season in South Africa on one of the great white programs and is no stranger to the world of sharks.

Flying conditions were anything but mild. The 40kph wind made hard work of our efforts and at 5000ft above Beau Vallon bay we found some serious turbulence that had me working overtime. It was a tough initiation into micro lighting for Gareth and a rather special welcome home greeting for me - Seychelles flying is def not for the faint hearted!

Of course turbulence and altitude are no strangers to me. However, it does not mean that the effects are any less! Truth be told it takes a brave man to remain calm when sitting in something that is just a bit more substantial than a deck chair, more than a mile above the ground while being shaken by turbulence that is not always understood. (I know, that is quite a sentence) but i need to reiterate something about my special world to you. I spend a lot time above the ground - intimate time, in close personal contact with the air, which has made me realize that we are more at home on the ground than above it. At first this seems a rather obvious thing to say but considering my background it is a real revelation to me - one that goes beyond just the mere meaning of the words. I have come to know the sky as a living organism (not a new idea by the way!). However, for me it is more significant because of the open cockpit nature of our little aero plane - the intimacy of air upon my face, the feel of the wind on my wings is more direct than any other aircraft in existence. I get to experience the sky like very few pilots do and thus get exposed to an element or a dimension if you wish, that is not well known. That the sky is a real living entity, that we get to explore parts of this world like necessary bacteria moving within the blood of an animal - part but yet apart. And as beautiful as it gets so too it can be scary. Every now and then I get unwillingly exposed to this kind of fear, brought on by just being in the wrong place at the wrong time. The invisible air always makes us guess as to the nature of her flowing patterns and having studied this world with the use of physics, observations and experience I have come to realize that our predictions are not always correct - flow patterns set up frequently without our knowledge thereof and it is exactly these unpredictable bits that can shear my wings or turn our little orange plane upside down. (Again this is no secret - it is a well known fact that any aircraft can be broken up by severe turbulence and the scale of turbulence does exists more frequently than we realize!)

So with this in mind, it is small wonder that at 5000ft, while sitting in a glorified deck chair, I in all my experience and wisdom become scared. While I understand the nature of the turbulence there is always that nagging thought of that unpredictable element, what we would call, a freak of nature. I know of these unexplained things that have happened to pilots before and the thought creeps up on me - could this be my time... It is sobering stuff to contemplate and it takes courage to stuff that into the back ground while you concentrate on the here and now - fly the damn plane!
"Can you see any whale sharks down there?" I ask Gareth. The radio is kind of loud above the wind and engine noise but a comforting distraction non the less (The changing wind velocities and directions we are encountering cause a constant change in sounds - varying pitch vibrations, fluctuating engine rpm, wing movements and not to mention the oscillating gravitational field that is anything but comforting to the stomach!)
There is a bit of a nervous chuckle before he answers, "No! I can hardly see a boat from up here never mind a whale shark!"
In return I smile while looking down, past my butt, to the sea more than a mile below us...
Wish you were here!
:-)
Posted by Unknown at 3:36 AM