There is another side to Seychelles – and let’s be frank and not beat about the bush – call it the shitty side. (Seychelles does have a dark side too). Take for example our lady-slipper loo. This masterpiece, aptly made to perfectly simulate the waist it is designed to carry, has been my main focus for today. (It is kind of funny when you have this on your brain how one’s focus seems to be contaminated by that very word that comes to mind too.)

Though there is some attraction to stumbling out into the garden for a pee first thing in the morning, the same cannot be said for a number two, so unblocking the lady-slipper-throne has become a priority. 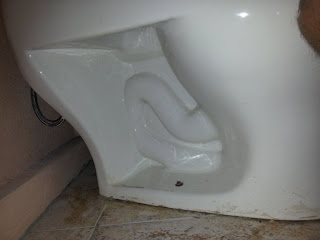 The resourcefulness to un-block gets blocked by a particular sharp bend in the built in design of the lady-slipper-throne. (I mean, have a look – who in the world came up with such a crap design?) Nothing would follow the slippery path past this joint – not the hose-pipe or the old wing wire I doubled up (for some added rigidity) could get past this bend. Finally an old wash basin plunger got some gap going for the water to slowly flow down-stream but it is still not safe enough for normal use. The problem lies not only in the sharp and bendy exhaust but in its diameter which is only fit for little ladies and their miniature poodles. Even if cleaned I can see this becoming a regular problem. It was not made for men, that I am certain off.
Perhaps I can allow a light string to be washed down stream enough to be caught on the backside of the house. This can be tied to a bigger string which in a series of steps could allow a thick rope to be trailed through. Perhaps the giant sized dental floss action could do the trick…

Just an hour later I was cornered in the North West by a large line of rain that had set up in a convergence line, effectively cutting me off from the airport. It is quite something to realise that your options are a 40 mile flight into wind, far out to sea to get around the irritating rain or try to get over it. There was the long way or short way, neither of them being the right way. In the end I squeaked over a lower gap in the cloud at ten thousand feet before spiralling down on the other side – shaking and shivering from the cold and relief.

Zero sharks but plenty of adventure both in the air and on the ground!