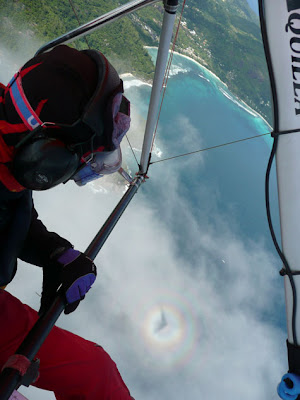 This is a pic over bay Lazare with a Haylo on the clouds below (We call it a pilots glory) I would often sneek up above the clouds for this pretty sight...

Today was a rather special day (well, with this kind of work what day is not!). Truth is I see amazing things from the air and more often than not I don’t even mention it anymore. All my babbling just seems to become too much even for my liking with the result that nowadays I tend to keep my thoughts to myself. However, sometimes something happens that makes me compelled to tell (or write) about it and today was such an occasion.

It was a long and hard day and while routing back to the airport I spotted two dolphins out on the hunt. A school of nearby fish went flying in all directions before one of the dolphins happily sped off with a fish in its mouth. (Yes, I have eagle eyes and can see the fish clearly protruding from the sides of the mouth of the dolphin even from 1500ft up!) This was not unusual but these two led me to their small pod, one of which was a youngster about half the length of the mature dolphins. A yacht passed nearby and stopped to look at the small pod (9 individuals). At this point the little chap seemed intent on getting a closer look at the yacht to the clear discouragement from its mother. The mother kept on trying to cut off the little guy from approaching the yacht but like a determined mischievous teenager he (or she!) wanted none of that. Persistently dodging his mother’s blocks, I watched as the little guy suddenly got within visual distance of the yacht and just like a puppy getting a big fright, sped off at bewildering speed. It was comical. All the other dolphins dived with the youngster only to resurface a moment later a short distance away while all seemed to dart past the youngster as if to say “we told you so…”.

As the pod started moving away from the yacht, the little one’s curiosity got the better of it and like an inquisitive cat stalked its way back; slowly, cautiously and then on eye contact with the yacht raced off back to the pod (with one of the adults in close pursuit – they seemed to be keeping a guarding eye on him all the time). On rejoining the pod the youngster would dive and race around the others, playing with gay abandon - not unlike a young Giselle, fresh and full of youthful energy, jumping and bounding around a large paddock, almost annoying the older animals with unbridled joy, born from discovering the happiness of life itself (or a yacht in this case!).
Like all other animals play when young, the little dolphin did the same; stalking the yacht only to race back to the pod with boisterous darting and spinning among the others and then repeated it all over again. AS I flew on to the airport, I smiled with my heart at witnessing something new – part of the meaning of life even in a little dolphin’s antics at discovering a yacht.

It was rather special.

Email ThisBlogThis!Share to TwitterShare to FacebookShare to Pinterest
Labels: A special day.