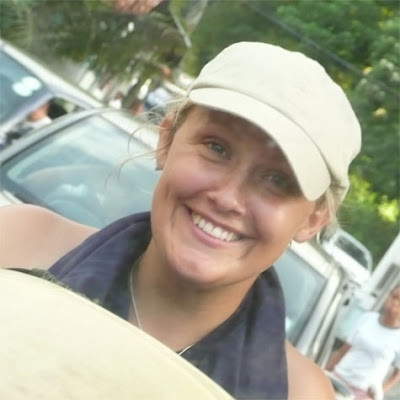 This is a pic I took of Abi while she was sitting in the back of the picup truck after a good day of whale sharking.
We have been having some great days of whale sharking. So far every time the boats have gone out we have found at least four whale sharks. The customers have been very happy with one day, two boats enjoying two whale sharks for an hour! When we left the whole boat gave me a cheer over the radio and it was one of those that you could hear people where completely over the moon. It was a pretty good day. But out of all the sharking and action I am drawn to a beautiful moment…

“You found shggggquelch…berto!”
“Say again?”
“You found shggggquelch…berto!”
I was having a hard time to follow the excited chat of Abi, who was on the boat down below.
“OK, Abi, I get that you are happy.” I replied over the radio. Down below there was a shark that kept coming back to the boat which of course makes divers very happy. They don’t have to chase after a shark; instead by just hanging in the water they could get a great view of the biggest fish in the world as it kept coming back for more. Like Abi and everybody else, I too was happy. From the air to me it meant a bit of a reprieve, a time to rest my eyes so to speak. This one stayed for more than 30 minutes.

That evening while down loading track logs onto the computer, Abi joined me.
“Thank you Johan. You found Umberto for us again” she was smiling like I had found her something that had been long lost.
“I found you what?” I said.
“Umberto. A whale shark we spotted a week ago”
“Umberto is the name of a shark?”
“Yes.” She said nonplussed about the way I had asked the question.
“Who named the shark Umberto?” I continued.
“I did.” she said and when I sensed she was not going to add anything further to that I had to ask why? (I was determined to get to the bottom of this unusual name.)
“Well, it has a marking on its one side that looks like the letter U.” she said. “That’s why I called him Umberto…”

Let me just clarify, it is pronounced Umberto as in umbrella and not as one might have expected like the letter U as in ‘Hue’.

“Abi, with such a profound marking on its side, don’t you think you could have come up with a better name?” I asked.
“What’s wrong with Umberto?” She asked.
“Well, it’s not very original is it? It’s a ‘U’ and it’s a big fish and what about calling it U-boat?” I asked rather enthusiastically. (U-boat!? I know, but it was the first thing that came to mind. Now I think Hugo Boss would have been more appropriate! ;)
“Why don’t we just call it J-boat” she said slightly irritated.
“Well, there is no such a thing as a J-boat but a U-boat was a Second World War German submarine.” It was then that I remembered it was usually only boys that played with toys like submarines and that Abi had probably never heard of the U-boat thingy.
“But this is a whale shark, not a submarine” she said.
“Exactly Abi and they both dive and stay under water. So U-boat would be a perfect name for a whale shark with a distinct U marking on its side…”
“Oh! I think I will just call you Borris...!” she replied in a slightly in-dignified manner. I was smiling and I could sense that Abi knew I was making fun of her. Her remark made me even more inquisitive as to the nature of the beautiful blue eyed blond lady, who really had an affinity with these gentle giants. I was intrigued about the connection she thought I made to ‘Borris’, realizing that it is perhaps the same connection that the name Berto had with a ‘U’. (None). Invariably I had to admire what it was to be a woman. It reminded me of a great joke and for those that have not heard it before I am republishing it here. (With respect!) Of course I know too that I do this at my own peril. Who knows what wrath I am about to evoke from my girlfriends!)
;-) It’s true!
Wish you were here!
The joke...
A man was riding his Harley beside a Sydney beach when suddenly thesky clouded above his head and in a booming voice, The Lord said. 'Because you have TRIED to be faithful to me in all ways, I willgrant you one wish.' The biker pulled over and said, 'Build a bridge to New Zealand so I can ride over anytime I want.' The Lord said; 'Your request is materialistic, think of the enormouschallenges for that kind of undertaking, the supports requiredreaching the bottom of the Pacific and the concrete and steel itwould take! It will nearly exhaust several natural resources. I can do it, but it is hard for me to justify your desire for worldlythings. Take a little more time and think of something that could possibly help mankind.'
The biker thought hard about it for a long time. Finally, he said,'Lord, I wish that I and all men could understand our wives. I wantto know how she feels inside, what she's thinking when she gives me the silent treatment, why she cries, what she means when she says nothing's wrong, and how I can make a woman truly happy'.
The Lord replied;'You want two lanes or four on that bridge?
Posted by Unknown at 7:49 AM