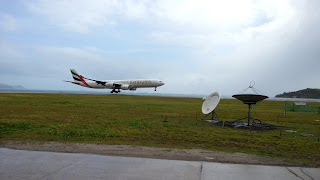 After my rather encouraging previous report things have changed somewhat. At this stage we have had 7 days since opening of which only 3 have been flyable. Today is even worse than yesterday – rain showers with strong gusty winds. At the airport I was just in time to see Emirates have to do a go-around. For a big plane that is a big deal though in Seychelles this time of the year not too uncommon. They had three go-a-rounds in the last two days…

The Anemometer is my favourite instrument. It is an analogue wind speed and direction gauge – classic recordings with a marker on paper. It is quite a breath of fresh air in an era where everything is going digital. This instrument records wind speeds and direction over time. It is a great way of checking the history of the wind action and I base much of my decision making on this fine instrument. If ever the recording touches the 30knot mark it is a simple black and white decision for me. This is a pic of the wind speed side of the graph… Say no more! 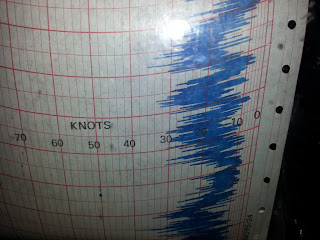 Neil has decided to learn to SCUBA dive on his off days. He admits at not being a water-baby and having drunk a lot of sea water yesterday. Today is day two of his adventure.

Last night we got invited to a crepe party, as the French call it (Pan-cakes).
“Veroee..” It was the third time the French lady pronounced her name to me and it still did not hit anything familiar. Even if her voice was sexy, her phonation and accent made vowels and consonants disappear and fade into one. Full of laughter and light-heartedness I asked again. Laughing and being in a similar mood, she shook her head and said, “Virginia...” It was very obvious she has had to do that before.

Our hostess, Anne, a French lady we met in our first week, found a new house and as part of the house warming she organised a mellower get together. I like to think it was to accommodate us pilots but reluctantly realised it was because Anne has a very sweet tooth. Nutela spread, honey and bananas were the favourite toppings. By 9:30 Neil and I had to call it quits after we both seemed to run into a sugar crash! This was unfortunate since the French ladies outnumbered us by two to one which was nice for a change.

Darren, the third part of our house (We are three sharing the house) met a new girlfriend. These two are quite madly in-love by the looks of things. So this morning he is telling me about his new lady (as he often does - she is French and another connection we have with the bevy of French ladies this season). Her name is Iesatta. Though she is French she is from some tropical island descend – Barbados I think, she has a beautifully almond coloured skin. Iesatta's family have come to visit her this week and that set the topic for the morning. (Don't worry. Last night Neil too was having a tough time getting the names.)

“So it is Iesatta (pronounce as in ‘eesaata’) Her sisters name is Buyla,” says Darren. “B-u-y-l-a” He enthusiastically goes through the motions of spelling it out for us. Neil and I are of course paying attention and listening intently. “And her brother’s name is Felloloo”.
“Felloloo..?” I ask while thinking to myself who on earth would give their kids such strange names.
“Yes.” He says before adding, “and her parents’ names are…” before pausing and saying, “Actually I have no idea how to pronounce them.”


Wish you were here! 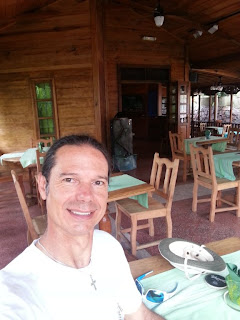