Short and to the point

Today was an interesting day. Savvi accompanied me on the flight as an extra set of eyes. (Four is so much better than two! ;) The winds had gone east and the west coast was thus off shore. If you were low you would get bumped around by the rotor turbulence and if you were too high you couldn't see much. It was kind of a toss-up between the two and we just made it up as we went along. I managed great navigation on the morning flight to stay clear of the bumpy stuff but on the afternoon things changed a bit and in one area we got hammered. For all the work we only got one shark – the boats did not go out.
Here is a pic of some of the action. 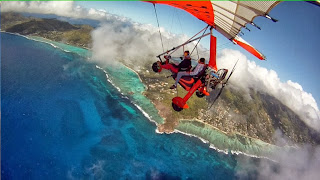 “Savvi and I still on the east coast passing “the point” – half way between the Airport (just off the pic on the right) and South point (off to the left).

Tomorrow they predict rain. We will just wait and see…

PS: Would you believe that all the interns have turned down to fly with me tomorrow morning? Are they insane!? Who would turn down the chance of flying around a beautiful tropical island in a micro-light?
Should I take it personally?


Hhhmm…. No. Perhaps they all have seen the weather forecast! ;)
Posted by Unknown at 10:24 AM