We have been having a bit of a blow for the last few days but today the strength pattern broke. The sharks were still there and the boats went out! Apparently there was a mellow shark around again – one of those that hanged around and hanged around. Everybody had a good time, according to Dirk.
His mom and her friend Bettie are here so he has been giving them a bit of a tour – making sure that every night they go to bed totally exhausted! 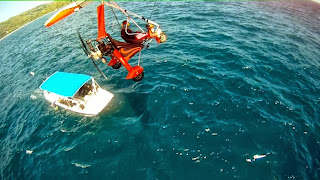 Having Dirk here is heaven sent. Not only does he help with the flying duties but he is also a very good friend, one with whom I have shared many an adventure with. Dirk is actually as Afrikaans as they get and I have been enjoying his conversations in the evenings immensely. He has that typical thick, drawn out Afrikaans accent, something that the ladies find attractive – according to Dirk. Of course nothing quite beats that feeling of comfort when one recounts homely stories in your mother tongue, especially if they are of “Spyker” and “Vienna”, Dirk’s two trusted dogs. Yes Dirk is very much a dog lover – something I observed too while watching him with our adopted cat, Lilly. Lilly is a small cat and she is quite the treat, often showing-off to us boys while jumping from curtain to couch and doing wild scrambles around the slippery tiled floor of our flat. On occasion she has graced us with the odd gecko and even a tiny little mouse. But when Dirk grabs hold of Lilly, he typically hoists her high over his head with just his one hand, the other hand casually hanging by his side while he talks to her. There is no scratch or tickle – just a kind man with a wide grin of pleasure peering up at Lilly while she hangs like a sack of potatoes draped across a man’s arm wondering ‘what the?’ It become very easy to sea Dirk is used to handling only dogs but Lilly loves him none the less. 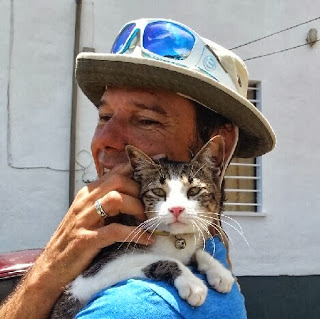 Lilly in a more dignified pose...

As I was saying, Dirk has been reminiscing about his dogs: “Spyker” a bull terrier (“Spyker” is Afrikaans for “Nail” but the name has other connotations too which I will refrain from mentioning here), and “Vienna” a Dachshund, with a name that needs no translation but in this case needs to be pronounced with that wonderful Afrikaans accent. I have long ago learned too that unlike one would imagine, “Spyker” is the timid one while “Vienna” is the terror, apparently with no fear what so ever and with a pet love for cats.

“Johan,” Dirk says, “His eyes glaze over when he sees a cat.”
I of course chuckle at the though. Even Dirk, who rules with a stern hand (I can vouch seeing him with Lilly), admits that when Vienna sets his eyes on a cat he becomes unstoppable. Apparently he gets tunnel vision to such an extent that he would often charge right past his quarry, having worked up such frenzy in thought alone that he seemingly loses sight of the actual feline during the charge. With a growl and huff Vienna would grind to a stop, sniff the air, look around in a daze, before setting eyes on the unfortunate cat to follow through, if the cat has not used this opportunity to make its escape. Though he has not killed any cat, none apparently have stood up to Vienna’s challenges – even the ones who rule the house, supposedly in charge of large dogs such as Rottweiler’s and the lot. It seems no one has ever told Vienna what the rules are.

So Dirk starts to chuckle as he gleefully recounts the tale when once again Vienna set sight on a feline and before Dirk could stop (shouting does absolutely nothing), Vienna was off in full charge – this time towards the neighbour’s cat who was blissfully sitting next to their pool. Vienna apparently got just the slightest of glimpses of the cat since they are surrounded by a thick hedge with the swimming pool trellis around the pool. Well, Vienna flies through the hedge, through the trellis and surprises the cat that it cartwheeled into the pool. By this stage Dirk is having a good laugh at the recollection of the event. 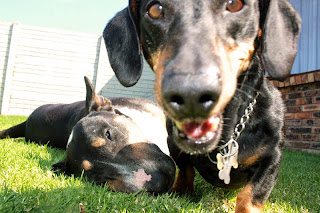 “He goes into such a state, like he ran through that fence so hard during the chase that he could not get back out. There was no way he could fit. I don’t know how he did it but we had to go fetch him out of the neighbour’s yard to get him home.”
And while I had a good hearted chuckle about Vienna it was even more meaningful listening to Dirk in our home language. It’s a bit of ‘home away from home…’

PS: Later Dirk added, “I felt quite sorry for the cat since it was the middle of winter…”