Freya was leaning out of the passenger window while I was busy pumping the left front tire. Looking up at her I realised she was being quite sincere so I could not help a good hearted chuckle. Perhaps it was a case of a difference in cultures or probably just a lack of experience I thought while returning the air hose to its rack. Freya is a beautiful young British lady – tall and slender with black curly hair and a super smile that makes every young man’s head turn. (Besides the fact that my head is not young or that my neck does not turn so well any more, Freya reminds me a lot of my niece!)

“It is exactly as the word describes. There is a slow leak in the tire and it goes flat after a few days so every second day we need to pump the tire…” I explained as I got back into the car while not being able to help myself fall into a light-hearted and happy mood – not that I wasn't in a similar kind of mood before but her question just seemed to fine tune our happy state. Our conversation on the way to the airport, though quite serious as far as topics are concerned – conservation and saving the planet kind of stuff – the overtones was always humorous.

Of course the fact that we have been blessed with good flying days with whale sharks to boot, just added to our lifted spirits. The whole MCSS whale shark team has been on a high and unlike the previous two years which has seen slow starts. (Last year it would not be far off to say we did not really have a start at all). Already the team has managed to do 3 whale shark dives, spending hours in the water with these amazing fish – one encounter was for almost an hour with a seemingly very happy whale shark. This year our team consists of 5 interns and three team leaders. (See the pic). So far I have had the great privilege of taking each of our interns for their first flight in a micro-light – Freya being one of them. 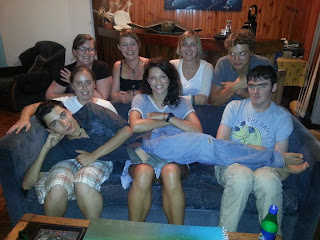 From back left, Sam and Jo who are team leaders. Ali and James - Interns. Front row is Sarah, Freya and Mat - Interns. Savvi, an intern from last year is enjoying a lie-down.

“Would you believe those wind turbines actually look cool?” I said as we drove down the hill into Victoria. Before us as part of the magnificent tropical island scenery, eight brand new wind turbines adorn the seaward side of Victoria bay. These wind turbines are a step in the right direction for Seychelles in becoming more energy efficient. The wind farm is a 6MW facility with each wind turbine generating 750kw of electricity. When considering that the islands sole energy source is from diesel generators that consumes almost 40% of the country’s gross fuel imports, the importance of this step becomes even more apparent. Of course, given that we considered ourselves nature conservation activists, we had to chat about the negative side of these wind turbines too, which are not always as green as one at first would imagine. Strangely enough in the wrong area the large blades have a tendency to kill birds, the seemingly slow turning blades going fast enough to strike a bird in mid-flight. Even if the large length of the blades create the illusion that they are slow turning, on a really windy day it is not uncommon for the tips to be traveling at more than 100 miles per hour! Later studies found that the blades actually create some subsonic wave patterns that disorientate birds causing the high number of strikes. If a wind farm is set in or near a migratory route it could be disastrous.

“Oh and they strike a lot of bats too.” Freya added.
“Bats?” I asked while my mind could not help imagine these tiny flying creatures with their super acoustic sensors becoming blade victims, at a time when no one is watching.
“Yes” she replied before adding, “…and they found that if they painted the blades purple then it would strike fewer bats but the people didn't like the idea of purple blades. I guess it would make them more of an eye sore, so they voted against that.”
“Purple!” I said in disbelief, while having a good chuckle. “How on earth did they discover that!?” I added while we both laughed at the crazy idea that the colour purple has an effect on the navigational abilities of bats. How ironic too that people would care more about the colour of the blades than saving bats.

“So these two bats where hanging in a cave and the one says to the other, ‘listen, I have had it, I’m starvin’, I’m going out there to get me a nice juicy cow.’ You can’t do that’, the other one says, ‘it is broad daylight out there and you won’t be able to see a thing’. ‘Well, I don’t care, I’m starving and I’m going’. So off he flaps and disappears out of the cave.

At this stage Freya had caught onto the fact that I was telling a joke and already was giggling about the funny bat hunting cow story.

“Ten minutes later the bat comes flapping back into the cave, blood dripping from his face.
‘Wow!’, says his buddy, ‘That looks awesome. I want some too. Where did you get that?’ ‘Come’, says his friend, ‘I’ll show you’. So off the two flap to the mouth of the cave where the blood dripping bat says, ‘see that tree over there?’ ‘No’, replied the other. ‘Well, neither did I’.” 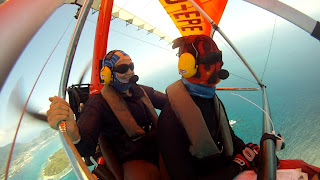 Freya doing a bit of piloting - a sure way of forgetting about slow punctures, purple blades or saving bats!