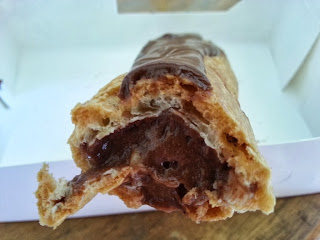 “Does it have a chocolate filling?” I asked while pointing to one of the long bread-thingies covered in a layer of chocolate.

“Oui” she said. I had to admire the perfect French accent.
“Great! Can I have one please?” I smiled being all warm and friendly. Her mannerism and dress was more akin to a secretary rather than working the bakery till. My admiration came with a slight tinge of sadness too as I remembered that once, some time ago, someone had told me too that I was a “lucky ‘bastard’”.

She sure was pretty.

It was lunchtime and I was doing my usual routine but for the discovery of the new bakery that had just opened next to my favourite take away shop. Moments ago I called Sam with the news that once again there were no sharks. (Dirk and I actually feel quite guilty to call Sam with the news of no sharks – her disappointment is rather disheartening!) Of course it is not just Sam that was being effected, the interns too were feeling frustrated. After starting on such a high, the lack of sharks over the last week and half have put a slight damper on things.

“That will be 30 rupees” she said while her eyes locked on mine. They were emerald green and exquisite, the beauty not lost on me while I fumbled through my pocket for some money.
“Thank you” I said before adding, “and I wish you all the success with the new shop.”
“Mercy” came her reply. Ah, there was that perfect French accent again. Taking my chocolate éclair in its pretty box I walked out of the shop.

Later on, back in the hangar I shared lunch with Donn – he was a Captain in the Seychelles Air-force. We often have a good chat and over the years have built up a good friendship. Of course he could not help admire the tempting and enticing look of the chocolate éclair and what a rare find that was on the island.
“Talk about tempting” I mentioned. “I have to tell you about the pretty lady working at the bakery…” Soon we were discussing the merits of admiring a beautiful lady. Suddenly Donn looked at me with a grin before adding, “Well, at least you could take the chocolate éclair home with you…”