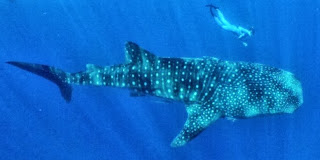 
Dirk was beaming from ear to ear. He had just walked through the door after his afternoon flight. As usual he had a bag with some snacks and groceries but I could not help notice the two empty beer bottles in his hand.

“We got 5 sharks this afternoon!” He said. OK, so perhaps the empty beer bottle weren't the reason for his happiness – or at least all of it. “It was amazing!” He continued. “This morning I got 1 shark but this afternoon we got 5.” He was shaking his head in a kind of elated disbelief. “Five!” he said again, this time with more emphases. Of course given the recent drought of whale sharks this was good news.

“Awesome!” I answered enthusiastically before settling in to listening to Dirk.

According to him the interns and clients are going to sleep well tonight, some most probably were going to be sore too – they had a lot of encounters so were clambering in and out of the boat all the time. It was great to hear – nothing like a good bunch of encounters to lift the spirits of everyone.  What made the day even more special was the fact that the wind was just 5 knots. In these light wind conditions flying becomes more a pleasure than work and Dirk made full use of it.

“Jis!” He says with boyish enthusiasm, “I have forgotten how fast the micro-light lands when there is no wind. The wheels made the same noise as a Boeing!” and Dirk whistles his rendition of tires hitting the runway. I of course have a good chuckle. It is so good to share in his happy state. 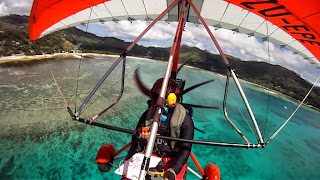 
PS: Savvi just popped in inviting us to the bazaar. He too is in a happy state and sure is looking sun-burnt!
Posted by Unknown at 3:33 AM